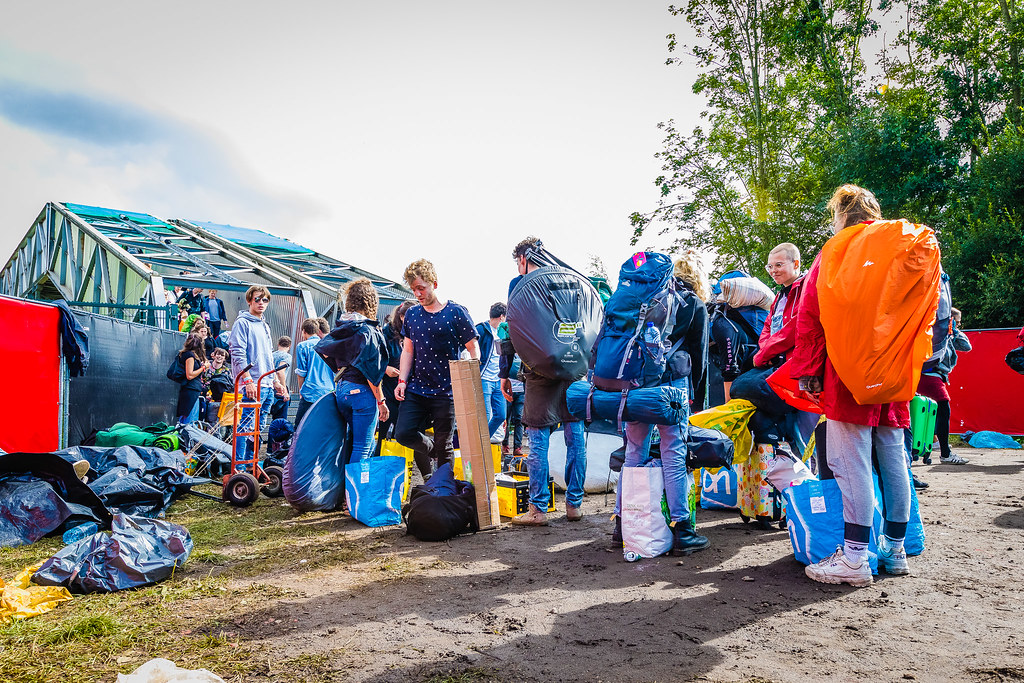 Three days Lowlands festival can feel like three weeks vacation or how three days with evil overtime. Actually, it is now even four days. The Thursday starts with 30 last year.000 lathable radio headphones and is probably largest "silentdisco" in the world.

But this superlative is only one under countless event points this weekend. This time even the Dutch Prime Minister Mark Rutte was involved in one of the morning valleys, just to clarify the meaning of the festival for the cultural scene of the Netherlands.

In the cinema tent a preamn of the "Maradona" film, a huge gay disco (Adonis), a 24hour terrain incl. Canopy, Gastro and DJ`s from Thursday to Monday 11:00. Boredom can not happen.

The Concert diary but is not obliged to lifestyle, but the music. And for that, at least there are at least six stages to be considered in parallel. This year’s music program was clearly band-oriented than in previous years. Nevertheless, the night program with its various DJ`s will always remain an integral part of the festival.

On Friday you already meet old acquaintances at every corner: Slaves and Fontaines D.C. As already in recent weeks on other festivals in rough, good spiello. The Fontaines but also here again with exactly the same set in the same order. Something bored, that’s the meantime and here you can reach the audience, but not nearly the season targeted on the schedule.

Then the inevitable, evil overlaps. Ziggy Marley I would have liked to take along, but The Good, The Bad & The Queen Have priority. How to turn out later. Termined singer Damon Albarn still during the set, this was the last appearance of the band. (Whether at this tour or forever he left here). A very nice appearance with strings and great set design (keyword: Gauklerromantik).

Then continue Royal Blood, still no new album, but now two singers and at least some new pieces presented. As always a classic mood maker the two, you can just do not go wrong as a booker. Afterwards De state From the organizer your knights. Since "The Prodigy" had to cancel yes, the band may decide with a large, pre-pre-planned headlining show the evening on the main stage. The well-known "Firestarter" cover makes the beginning, the rest is not my thing, but the locals are excited.

Saturday is initially all about Billie Eilish (Billie Eilish – Lowlands 2019). Already at Dervot Kennedy, the fans of the young superstars are already on hair color and silver jewelery from afar. Unfortunately, the IRE can not be ignored such a cult. Although he is one of the few singer songwriter, which has even found his regular place in the Formatradio, the show looks very sluggish and uninspired. There is actually just one mood. While that may fit out of the tent to be used, but is not worth mentioning except for the striking voice. Since "Glen Hansard" or "Damien Rice" have a very different caliber. Both what the show as well as the songs are concerned.

By visiting Billie I miss unfortunately The Vaccines and (especially a pity) too Sharon van Etten, which tragically occurs at the other end of the huge area.

For many, the day goes right now: Paul Kalkbrenner (at 17:30 ?!To), Jan Hopkins, Anderson.Paak and the demolition show of Idle are all known to me, but offer little new. The evening then holds a lonely highlight ready. As I Giorgio Moroder With his disco show already admired in Essen Giorgio Moroder – Essen and Düsseldorf, I decide for another time for The National, It should be worthwhile.

There are even evenings, there are The National Good, sometimes very good. What the band can be delivered today is not less than brilliant. From the first song arises an incredible energy, both before and on stage. And again I feel why I like to visit festivals so much. This mood would not be possible on a normal concert.

Matt takes up the energy immediately, plays with the audience, is the best mood and appears right away to the Ca. 150m remote beer stand outside the tent with fans to start. Later he drives for a walk on the camera car, tells Wirre Stories and announces singers who are not there at all. So just everything is great. 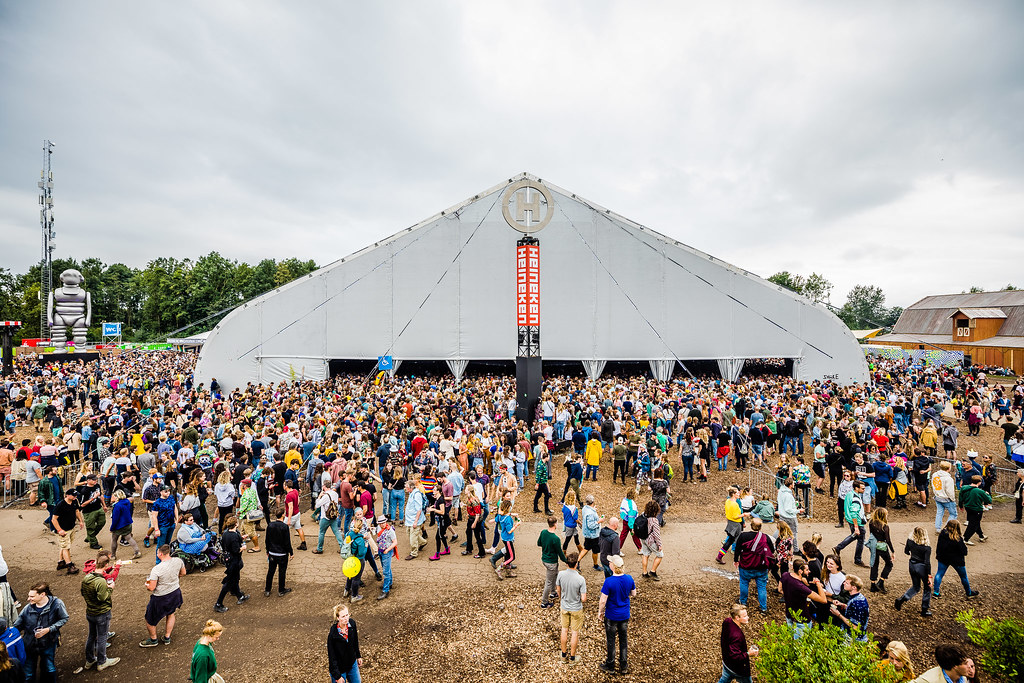 But never he is "over," all missions get fully with and does not ruin the show, as otherwise sometimes happens. And although with Kate Stables (by this is the kit) today is only a singer, the songs of the new album will succeed. As a new end, a nearly 10-minute version of "About Today" decides the evening today. "It’s what a blast" screams Berninger again and again, takes a further bottle of wine, opens her in the first row and does not want to go behind the stage. Where does the band only take this energy: evening for evening, year after year.

After yoga, karaoke and other gaming things go back on Sunday noon immediately. This time around 12.00 clock with the loving Julia Jacklin. Their very worn program would have also been safely passed throughout the festival for a later hour. My favorite song "Don`t Know How To Keep Loving You" Julia Jacklin – Session is surprisingly close to the beginning, the show ends today with "Pressure to Party" and "Head Alone".

Then a remarkable Dutch newcomer. Tamino Plays very carved but also melodic ballads, deep tready and emotional. Unfortunately today without "Colin Greenwood" from Radiohead am Bass, who had otherwise accompanied him more often. A name of which you will hear. Especially "Habibi" Tamino – Session at the end disseminates real goose mood in the early afternoon.

And again many old acquaintances: Whitney, Sea girls, Bear`s the, Loyle Carner and James Blake. Franz Ferdinand Then have their big appearance on the main stage and a little luck. In addition to the 80s Berlin Retro TechnoBolze of fashion lecturers, there is little competition and so the old hits ignite a giant slope.

Most stay right, because of course all want a look at A $ AP Rocky throw that jumps pretty much directly from the courtroom in Sweden on stage. His stories may comment other, musically is his show at top level, even a guest appearance at the later headliner Tame Impala he does not take himself.

But I look at short Thomas Azier past whose great albums convince me. Today, however, his live band is overloaded with too much 80s-year bombast, because I prefer to go over to the original: New Order Play for the first time since 1985 !! (no joke) in the Netherlands, and accordingly, the mood is also.

A hit chases the next and around me are people between 13 and 63 years, some crying to "Transmission", other dancing to "True Faith" or dream of "Bizarre Love Triangle" in front of him. It is a charming retro show to do everything right at the New Order. Nobody expects new features or alternative versions here, it should sound like always.

Good that I play in parallel Black Midi Already seen in the "porter pop", so I could enjoy this show quiet conscience as a conclusion.

What remains is one Lowlands The big name. What used to be a low-schullauf for newcomer is today a completely different festival. Still very convincing, especially in organization and atmosphere, one should have felt and seen this specially built "city" on the polder.

Since the aftermovie from 2019 does not seem to be ready, the impressions from 2018 Lowlands Aftermovie 2018